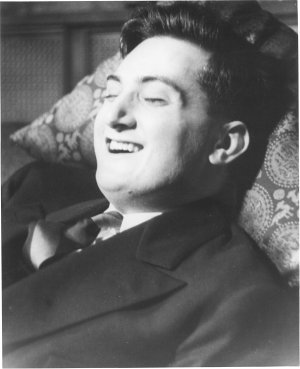 Morris Frank (1908-1980) was born in Tennessee, the youngest son of wealthy parents. As a six year old boy he lost vision in one eye from riding a horse into a tree limb and the second eye as a result of a boxing match at 16 years of age. Previously, when Morris was three years old, his mother was blinded from a horse-riding accident. He attended Vanderbilt University in Nashville during which time he sold insurance door to door. Morris married Lois in 1942 and they traveled for many years throughout the United States representing The Seeing Eye.

In 1927 at the age of 20 Morris read an article in The Saturday Evening Post by Dorothy Eustis describing a European school where German shepherds were trained to guide blinded soldiers. He wrote to her and expressed a desire to obtain such a dog and set up a similar instruction center in the United States. This courageous, enterprising young man was shipped as a package via American Express (imposed conditions of travel) from Nashville by steamship to Switzerland where he met Mrs. Eustis and her head trainer/geneticist, Jack Humphrey. 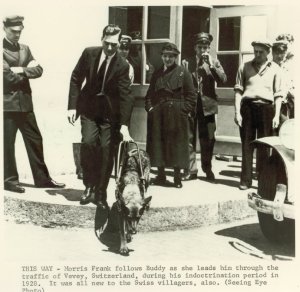 THIS WAY – Morris Frank follows Buddy as she leads him through the traffic of Vevey, Switzerland, during his indoctrination period in 1928. It was all new to the Swiss villagers, also.

After training with Buddy for five weeks he returned to America with two charges: to demonstrate that dog guides are safe human guides and to get the dogs accepted in public places. With Buddy and tenacious boldness, he demonstrated that the consequences of enhanced and safe mobility were dignity, self-confidence and independence.

Together with Dorothy Eustis as President, Jack Humphrey as Vice President of training and research, Morris founded The Seeing Eye, the first dog guide school in the United States. The school was moved from Tennessee to New Jersey in 1931. He served as managing director from 1929 to 1931 and as Vice President/Division of the Blind from 1931 to 1956. In this role he visited students before and after receiving their dogs, addressed many Lions Clubs, visited with newly blinded veterans, ophthalmologists and conducted countless radio interviews. 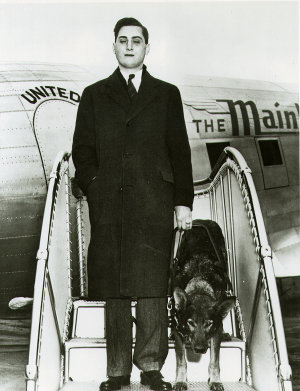 TRAVELERS – Morris Frank and his first dog, Buddy, traveled thousands of miles throughout the United States carrying the message of hope to blind people and demonstrating to the public the value of a dog guide. Buddy, who broke many travel barriers for dog guides, died shortly after this photo was taken in 1938. Morris has had five dogs–all named Buddy

He was instrumental in shaping major policies and procedures: establishing criteria for students, securing dogs with suitable mental and physical characteristics, and locating capable instructors who were able to keep up with the physical demands of working both with dogs and people. His job in public relations involved persuading leaders in agencies for the blind of the value of the dog and approval from public transportation and restaurants to allow the dog to accompany the owner.

In 1956, 28 years after his arrival in Switzerland, he retired after travelling thousands of miles as a roving ambassador. Subsequently he launched his own insurance business in Morristown. In 1978 Morris became the first person to reach 50 years as a Seeing Eye dog user. On the 50th anniversary of the founding of the school, the U.S. issued a commemorative stamp in honor of The Seeing Eye at which time Morris returned to address the gathering, representing the school for the first time in 20 years. After 80 years in 2009 the school had grown from a class of 2 students with 2 dogs to having placed more than 15,000 dogs which have brought a new level of mobility, safety and self-sufficiency to almost 8,000 men and women. 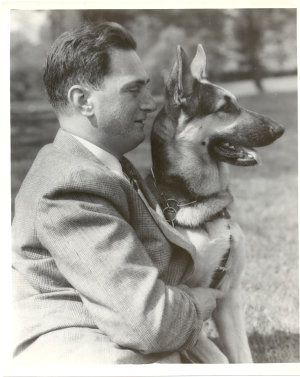 Morris Frank was honored in many ways. He received an appointment as Colonel by the governor of Tennessee and in recognition of his accomplishments, Morris was invited to meet with many US presidents. Together with Blake Clark, he wrote First Lady of The Seeing Eye the story of Buddy which led to the movie entitled "Love Leads the Way" in 1984. On the 75th anniversary of the school’s founding, a bronze statue of Morris Frank and Buddy, entitled "The Way to Independence" was dedicated in Morris Frank Park, Morristown, New Jersey.

Photos of Morris Frank courtesy of the Seeing Eye

Morris Frank: In His Own Words: