Made by Tafel Brothers Manufacturers
for the American Printing House for the Blind (APH), Louisville, KY 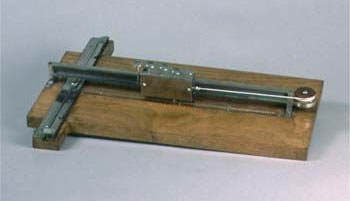 James F. McElroy of Lansing, Michigan patented his writing machine for the blind in 1888. McElroy is listed on the patent document as "Assignor to the American Printing House for the Blind," the Printing House having purchased the rights to this machine for $300 in 1887. At the 1888 convention of the American Association of Instructors for the Blind, Mr. Huntoon of the Printing House announced, "The machines of the McElroy point writer have been made successful after much trouble; and have been distributed to the various Institutions. I have been informed that we can offer them at ten dollars per hundred, or at the rate of fifteen dollars in smaller lots."

Tafel Brothers, Manufacturers of Surgical and Electrical Instruments, a Louisville company, manufactured the machines for $12 each. Records show that there were 47 machines made between April and September 1888. There are no more records of manufacture after that, however, in 1890, Tafel billed APH for changing ten writing machines that would indicate that there were problems with the writer. McElroy’s Point Writing Machine was advertised in APH catalogs between 1889 and 1893 so it was evidently not a successful product.

The McElroy was one of the earliest upward writing devices. It was designed to emboss dots in the New York Point system which has a cell that is two dots high and of variable length. The embossing carriage moves along a track mounted on a wooden frame. The two keys are hollow styli and embossed dots are produced when the styli force the paper into the formed matrix. The matrix is a strip of copper embossed with raised two-dot cells. This machine is number 19.

Loan from Perkins School for the Blind