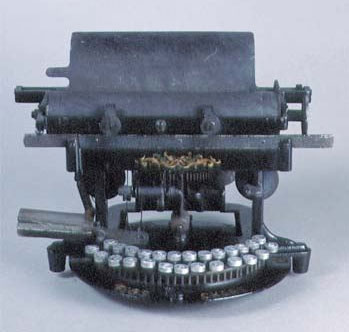 This typewriter was originally designed to cut stencils for the mimeograph machine, an Edison invention. This particular model was adapted for blind people by Mr. Todd of Kansas City. Todd was the Superintendent of the Kansas State Institution for Education of the Blind.

The machine was operated by depressing a key, moving one of the pointers until it strikes the key, then pressing the lever at left to activate a hammer. The hammer struck a plunger that typed on the underside of the roller. In order to view the typed paper, the operator had to swing the carriage to an upright position.