Bill English (1929-2016) was born in Chicago. He received his Bachelors from Cornell in Iowa and his Masters from Iowa State University. He was married to Janet and they had one daughter and two grandchildren.

Mr. English’s entire career was devoted to the education of blind and visually impaired children and youth. From 1952-1954 he was at the Kentucky School for the Blind as a teacher and coach and, from 1954-1957, at the Ohio State School for the Blind as Principal, teacher and wrestling coach. He and his family then moved to Virginia where he served as Principal of the Virginia School for the Blind from 1957 until 1970. Sensing the need for a teacher preparation program within the state, he initiated preparations for and later helped to establish the vision program at the University of Virginia. In 1970 he moved to the Wisconsin School for the Visually Handicapped, where he was Superintendent until his retirement in 1994.

Bill English has been described as a visionary leader who expanded services to all students with vision impairment within the state of Wisconsin through innovative outreach programs and a model service delivery system. Children were identified by the outreach program, invited to the WSVH and given a comprehensive evaluation by the specialists on the staff to help parents look at options for their child. He also began a low vision screening of preschool visually impaired children in Wisconsin. Another program he initiated was a cooperative school program with the Janesville Public schools, K-12 for those students who would benefit from being mainstreamed during the school day. 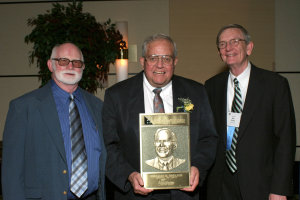 Mr. English developed quite a reputation among his colleagues for his sage advice and counsel and for his ability to motivate others to be better teachers and leaders. His terrific sense of humor helped smooth over many tense and potentially volatile situations. He was known for his ability to convey his dreams to others and for his willingness to take risks for the benefit of the students he served.