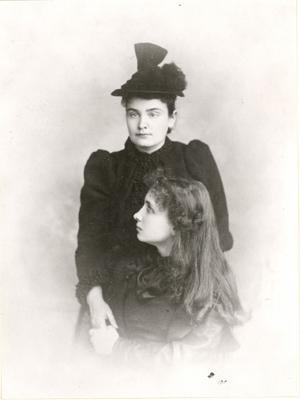 Helen Adams Keller was born in Alabama in 1880. At the age of 18 months she experienced a fever that left her deaf, blind and unable to speak. An extremely intelligent and sensitive child, by the age of seven she had invented over 60 different signs by which she could talk to her family. Because of this restricted communication her frustration and anger grew and were not relieved until Annie Sullivan, a 20 year old graduate of the Perkins School for the Blind, came to be her teacher. With her help Helen learned the manual alphabet, braille, the Tadoma method of reading lips and later learned to speak. With Annie as her interpreter, in 1888 she attended Perkins Institute for the Blind and in 1894 the Wright-Humason School for the Deaf in New York. She received a B.A. cum laude in 1904 from Radcliffe College. She thus became the first deaf-blind person to graduate from college. In 1936 she moved to Connecticut where she lived until her death in 1968 at the age of 87. 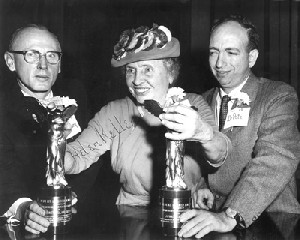 While at Radcliffe, Helen Keller began a writing career which was to continue for 50 years. In addition to The Story of My Life, she wrote 11 other books and numerous articles on blindness, deafness, social issues and women’s rights. Many books and plays were written about her life.

Despite the broad range of her interests, Helen Keller never lost sight of the needs of others who were blind and deaf-blind. Soon after the American Foundation for the Blind was established in 1921 she became a member of the Foundation staff, where she worked until her death in 1968 as counselor on national relations. In 1932 she also became a vice-president of the Royal National Institute for the Blind in the United Kingdom. In 1946 she was appointed counselor on international relations for the American Foundation for Overseas Blind (renamed Helen Keller International), visiting 35 countries during seven trips between 1946 and 1957. 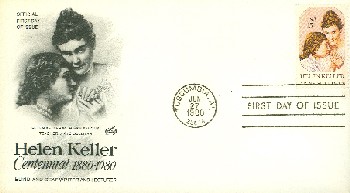 Helen Keller received honorary doctoral degrees from Temple University, Harvard, Universities of Glasgow, Berlin, Delhi and Johannesburg. An entire room at AFB is devoted to a collection of her personal papers and memorabilia, including Brazil’s Order of the Southern Cross, Japan’s Sacred Treasure, the Lions Humanitarian Award for lifetime service and the Presidential Medal of Freedom in 1964. In 1965 she was one of the 20 elected to the Women’s Hall of Fame at the New York World’s Fair.

More rewarding to Helen Keller than the many honors she received, were the acquaintances and friendships she made with most of the leading personalities of her time. There were few world figures, from Grover Cleveland to Charlie Chaplin, to Nehru to John F. Kennedy, that she did not meet. She was truly a remarkable world ambassador and a distinguished leader advocating for better services for blind and deaf-blind wherever she went.

Historic footage! Helen Keller and Anne Sullivan in a Vitaphone newsreel from 1930:

Dedication of the Helen Keller Hall, University of California, Berkeley, 1987:

Find Out More About Helen Keller