Peter Salmon (1895-1981) was born in Hudson, Massachusetts. He was educated at the Perkins School for the Blind as a "partially seeing" student. After completing two years of post-graduate work, specializing in teaching the deaf-blind, he joined the staff of the New York Association for the Blind. 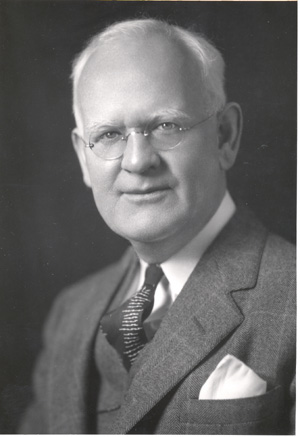 In 1917, Peter Salmon took a position with the Industrial Home for the Blind as a salesman and subsequently served in a number of posts until he was appointed executive director in 1945. IHB of Brooklyn became Peter Salmon’s own unique creation as he built it into the most complete voluntary agency service program for the blind in America. Two outstanding service achievements stood out: the first, a break-through in IHB’s program for the partially seeing in the form of a workable optical aids program, which brought ophthalmologist and optometrist together; the second was a program for deaf-blind adults. He had begun to show the way in which a private agency such as his could make use of government resources without losing its own identity.

Peter Salmon had a talent for dealing with seemingly irreconcilable forces, a talent which was appreciated and respected by his colleagues. Newly available through the 1954 amendments to the Vocational Rehabilitation Act was a national program of research in rehabilitation of the handicapped and the National Advisory Council had just come into existence. Peter Salmon was the closest thing to everybody’s choice to represent the interests of the blind in this program, and he was to use this opportunity to bring into focus the awesome problems of the deaf-blind. He united with Helen Keller to do something for deaf-blind people and was probably the last of the notable allies of her active career, and one whom she perhaps prized the most because he was willing to take on the cause of people with multiple disabilities.

In 1966 he resigned from his position as Executive Director, assuming the title of administrative vice president and he continued to play a strong advocacy role at the national, state, and local levels. Though officially retired, his greatest achievement was yet to come, for Peter Salmon went on to found the Helen Keller National Center for Deaf-Blind Youths and Adults at Sands Point, NY in 1976.

During his long life, Peter Salmon developed an impressive list of accomplishments. He was responsible for establishing the first social services department to counsel blind people. He also started the first vocational placement service in 1929 and inaugurated programs that placed blind children in public school classes with sighted children. He helped found National Industries for the Blind, was a past president of the American Association of Workers for the Blind, a trustee of the American Foundation for the Blind and of the Helen Keller International. The recipient of numerous awards, including AFB’s Migel Medal and AAWB’s Ambrose M. Shotwell Awards, Peter Salmon was also the recipient of an honorary Doctor of Laws by Gallaudet College.

Photo: Portrait of Peter Salmon. Courtesy of the Archives of the American Foundation for the Blind