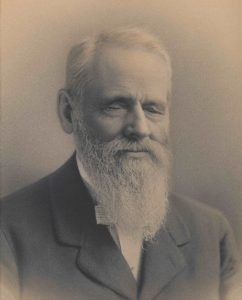 Over his long career in education, Samuel Bacon (1823-1909) founded an amazing three of the historic residential schools for students who were blind or visually impaired. Born in Ohio in 1823, Bacon lost his vision in a bout with scarlet fever in 1834. He attended the Ohio State School for the Blind and Kenyon College, and taught first at his alma mater in Columbus. He was remembered as a brilliant mathematician. Determined to seek his fortune in the west, he only made it to Galena, Illinois before hearing of state plans there to open a new school for the blind.

He founded the Illinois Institution for the Education of the Blind in 1849, around the time of his marriage to his wife, Sarah Graves. In 1852, he moved to Iowa and opened a private school in Keokuk for blind students, which in 1853 was chartered by the State of Iowa as the Asylum for the Instruction of the Blind. Angered by a decision to move the school to Vinton, Iowa in 1861—he felt Vinton was too rural—Bacon quit. He was a fighter for his students, and it often placed him in conflict with politicians.

By 1875, he and his wife were in Nebraska City, Nebraska. Once again, Bacon met with the Nebraska legislature and convinced them of the need for a place for students who were blind. He became the school’s first superintendent that year. At the time it was the western-most residential school for the blind in the country. The school opened on the 10th of March, 1875, with three students. After Bacon retired in 1877, he spent the rest of his life on his farm outside Nebraska City. These three schools continue today to serve the needs of their students validating Bacon’s belief in specialized education for blind students almost 175 years later.

Adapted from the nomination by Cliff Olstrom