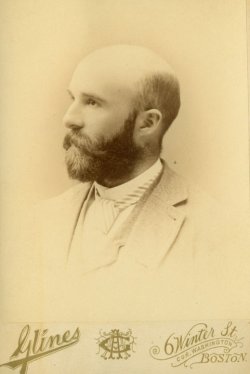 Edward E. Allen (1861-1950) was born in Massachusetts, the oldest of four siblings. He attended a progressive and unconventional residential school founded by his uncle, Nathaniel Allen, where his father James taught. He later attended school in Germany and entered Harvard at age 18, focusing on biology and modern languages and graduating cum laude. He grew up immersed in education. He attended medical school for one year but took a couple years off to support his brother’s education. He and his wife Katharine had two children and five grandchildren. While teaching at the Royal Normal College for the Blind in London from 1885-1888 he discovered his true calling of teaching students who were blind.

In 1888 Allen received an offer to teach and serve as headmaster at the Perkins School for the Blind. Two years later, he became principal and director of the Overbrook School for the Blind, where he oversaw the design and construction of the campus. The plan and layout which allowed students to travel independently and safely became a model for other schools for the blind. Returning to Perkins School for the Blind as Director from 1907 until 1931, he was once again the architect and builder of that campus. These buildings at Perkins and Overbrook are still in use.

Throughout his career Dr. Allen sponsored research in educational methods and in 1920 created the first professional training program for teachers of the visually impaired in partnership with Harvard College. It has been said that his greatest contribution to the field lay in his insistence that educational methods focus on the needs and gifts of the student. To this end he invested in playground equipment and swimming pools, integrated child-centered teaching techniques, and introduced speech therapists, corrective movement instructors, psychologists and social workers.

Beginning in the late 19th century he championed the braille code as the universal writing system for readers who are blind. He was one of the few educators who knew all four Braille codes which were struggling for supremacy in American schools for the blind. In 1898 he introduced the first interpoint and interlinear braille embossing equipment in the United States. Later he sponsored research and the development of standardized testing which established that the intelligence of people with visual impairment is unimpaired. In partnership with the American Foundation for the Blind he established the Department of Special Studies at Perkins in 1927, which conducted child-based research to introduce innovations in the education of students who are blind.

Allen frequently contributed to Outlook for the Blind and authored the column “Dr. Allen Says” in Teachers Forum from 1932 until 1946. In addition to articles on the education of the blind, he also wrote on the topics of industrial training for the blind, cause and prevention of blindness and the deaf/blind. His educational innovations were driven by the understanding that the needs and gifts of the individual student must be integrated in to the teaching plan.