Go to navigation for APH PE 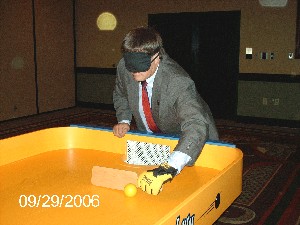 Not sure what PowerShowdown is? Join the majority of people in the United States. While invented in Canada and played rather extensively in other parts of the world, somehow it never managed to cross the borders into mainstream usage. PowerShowdown, known internationally as Showdown, is a combination of table tennis and air hockey. Invented in the 1960s by Joe Lewis and Geraldine York, the game is specifically designed so individuals with visual impairments or blindness (VI or B) can play without sighted assistance. Additional rules have evolved from different parts of the world to make the game what it is today. 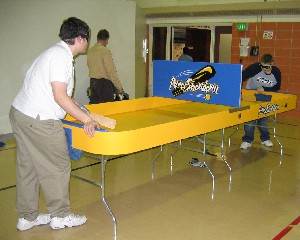 PowerShowdown has seen little use in the United States simply because most people are unaware of its existence. The tables are also expensive and difficult to obtain since they have to be ordered from Europe. Jim Mastro, Ph.D., has been working with a group at Bemidji State University in Minnesota to manufacture the tables in the United States. Considering the possibilities for social interaction as well as recreational or competitive sport, PowerShowdown is well worth discovering. 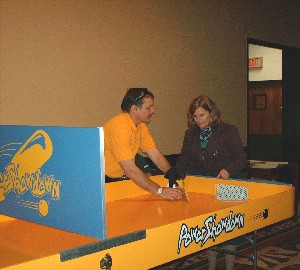 The game of PowerShowdown has many benefits. Kinesthetic awareness, ear/hand coordination, and spatial awareness all come into play. The greatest benefit is the social aspect. It allows people with VI or B to compete and interact with other people. PowerShowdown could replace table tennis or air hockey in the family recreation room, providing an opportunity for participation with a competitive twist for entire families. It will help integrate individuals with VI or B into the general population. 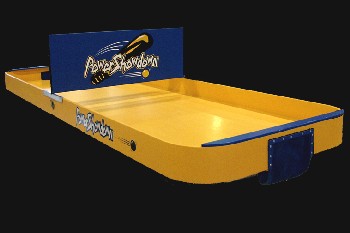 The tables are $3,000.00 plus shipping and handling. Each is individually crafted and comes with two paddles and two balls. For additional information, contact Jim Mastro via e-mail: email hidden; JavaScript is required